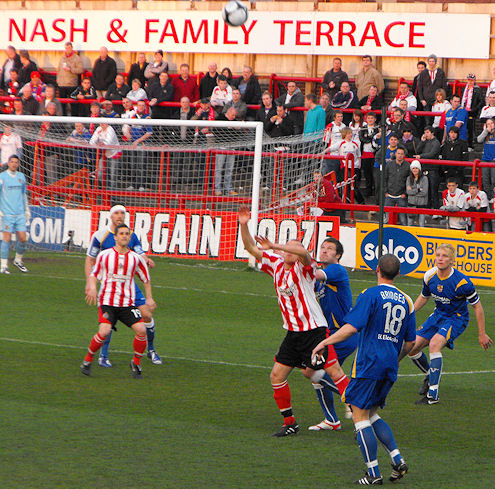 Altrincham, with two wins (but seven draws) in their last 13 games and already missing three players through injury, had bad news before kick off as keeper Stuart Coburn was ruled out with a back injury and Chris Denham was unfit following a road accident- someone had run into the back of his vehicle earlier this week.

Right: Peter Doran prepares to goes up for the ball as Chris Senior looks on.

Nevertheless, the Robins gave the champions-elect a very good run for their money. Indeed, Alty struck the bar twice. First Senior's header came back off the underside of the bar in the first half and in the second half a Nicky Clee shot deflected off Bostwick over the stranded keeper but again hit the framework.

Stevenage did not look like a top-place team for much of the game with sloppy passing and an inability to get clear sights of Alty's goal. But they got the winner seven minutes from time when Saunders did well to beat out a rare Sills shot only for Griffin to tap in the loose ball. Alty drop a place, on goal difference, to 13th, having now lost four games against the top three this season - all by a 1-0 scoreline.