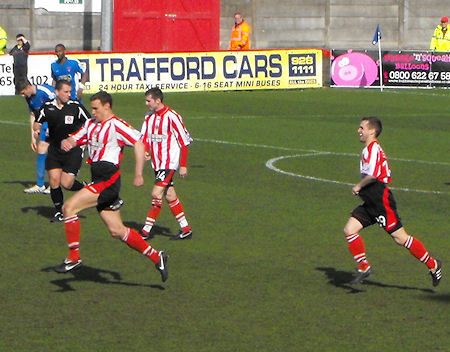 Altrincham secured only their second win in their last eleven games with this narrow win over Kidderminster Harriers. With Nicky Clee not in the squad - he has been ill as well as being injured - Alty started brightly as Carden, McAliskey and Densmore all had early shots. But the visitors took the lead in the 15th minute when McPhee got to the by-line, left of goal. Matthews headed the former Gravesend and Torquay man's cut-back firmly past Coburn.

After 26 minutes, Chris Denham equalised, at the back post, from John McAliskey's knock down and, with Kidderminster still enjoying more of the possession, Denham broke away two minutes before the interval. He fed Carden, to his right, whose shot was beaten out but Denham headed the loose ball into the net. However, immediately, the Harriers levelled with a similar goal to their opener. This time McPhee cut the ball back from the right by-line for Matthews to bundle it home.

The scoring was completed four minutes after the interval when centre-back Greg Young ran 60 yards from his own half up the inside-left channel before beating the Kidderminster keeper. The Harriers had plenty of attacking possession but could not get an equalizer. though it took a Densmore clearance off the line in the last minute of normal time to make sure. Alty have now only lost twice in their last 12 matches.

Right: Greg Young's strange goal celebration consisted of his pulling his shorts up to his waist and then running back to his own half, as shown!