From an eventful match, Altrincham emerged with a point thanks to an equalizer from Chris Denham in the fourth minute of added time. The Robins have now taken five points from their three matches this week, all against top six opposition. Today's result was achieved despite the club being reduced, through injury, to an available squad of just sixteen players. Things got worse when Danylyk had to be replaced after 21 minutes but Altrincham then took the lead, against the run of play, in the 34th minute. A clever lay-off from Doran allowed Densmore to fire home from the edge of the box. 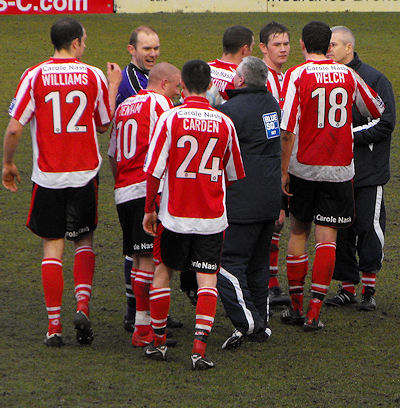 Right: Goalkeeper Stuart Coburn shows his delight at the end of the game with Rushden.

Greg Young headed an own goal to restore parity for Rushden after 40 minutes. After the visitors had got ahead, in the 73rd minute, when John Terry's brother, Paul, scored with a deflected shot, it looked as if the Diamonds would take all of the points. And when Denham hit the bar after 80 minutes that seemed to confirm it would not be Alty's afternoon. But a mix-up in the Rushden defence allowed Denham to lob the ball past the stranded keeper Roberts into the empty net in the fourth and last added minute.