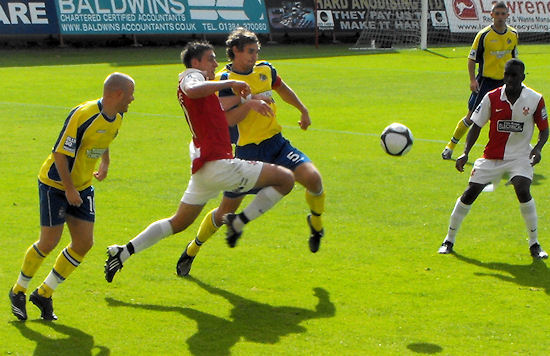 Right: Greg Young (in yellow) in action at Kidderminster.

For the second year running, Altrincham had the better of the opening stages only to fall behind after having an early goal disallowed for offside. Kiddy took the lead from their first real attack after Danylyk had lost possession in midfield; Coburn had to come out to stop Hadley and the ball rebounded to the Harriers, who scored through Smikle from close range (11 mins). When Johnson was tripped by last man Riley, the Harriers' man saw a red card. Alty continued to look the better side but Barnes-Homer was allowed to score when he received the ball in what looked an offside position but Alty did not play to the whistle. The striker played on and lobbed the ball over Coburn (23 mins).

After 36 mins Densmore was sent off for a two-footed tackle on Smikle to level the sides at ten apiece. The game was finally settled just 37 seconds into the second half when Smikle scored from close range after Hadley had been allowed to advance up the Kiddy right and get in a cross. It got even worse for Alty when Chris Senior was stretchered off with ankle ligament damage. The remainder of the second half was largely unmemorable though each side struck the bar in the closing minutes.