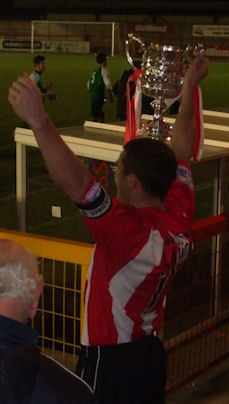 Altrincham's depleted squad worked hard to secure a comfortable win over the holders, Nantwich Town, in the Cheshire Senior Cup Final at Wincham Park. In a game played in a difficult, strong wind blowing from one end of the pitch to the other, Colin Little netted his fourth goal in nine days to open the scoring, heading home from Johnson's flick from right of goal in the 18th minute. Chris Lane lashed home a second goal nine minutes later as Alty mastered the windy conditions and bobbly pitch more successfully than the Dabbers. Dale Johnson was withdrawn as a precautionary measure at half-time, because of tightening hamstrings, Alex Meechan taking his place. A superbly struck 35 yard freekick from Shaun Densmore made it 3-0 (68 mins).