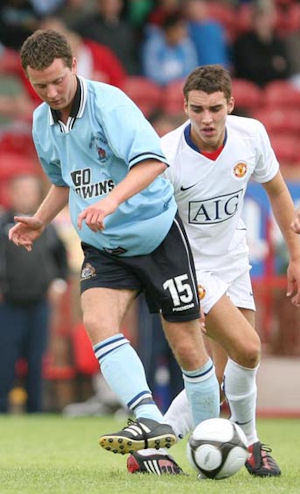 Right: Alex Morris, one of the game's debutants for Altrincham. Photo courtesy of GR Photography.

There was unwanted drama at Moss Lane on Saturday as this pre-season friendly fixture was abandoned after 86 minutes following a pitch invasion by visiting supporters. Trouble had been brewing all afternoon following the looting of the Thresher off-licence opposite the ground and at least one supporter gaining entrance to the stadium illegally. Although matters seemed to calm down as the match got underway, there was an increasing air of tension during the second half as Manchester United supporters congregated at the Golf Road End and created an intimidating atmosphere by constantly banging against the metal structure that constitutes the back of the stand. A couple of smoke bombs were thrown onto the pitch and six minutes after the impressive Rodrigo Possebon had scored Manchester United's third goal, the fans invaded the pitch, leaving referee Mr.Taylor with no real alternative than to call the match off with the safety of both players and supporters in potential jeopardy. The Police were originally called to the ground around 3.30pm and deemed "spirits to be OK" on attending during the half time interval. A second visit by the Police shortly before the pitch invasion, led to reinforcements being called, however the game had been abandoned by the time they arrived. No arrests were made.

In terms of the game itself, Manchester United's young charges, under the tutelage of Ole Gunnar Solskjaer, ran out very comfortable winners against a below par Robins side. Federico Macheda pounced on an embarrassing error by Alty keeper James Coates to give United the lead after 21 minutes. Coates stood on the ball after receiving a suspect backpass from Chris Lane and the 16 year old striker,signed from Lazio, gratefully accepted the gift. Macheda neatly converted Tom Cleverley's left wing cross in the 35th minute to score his and the visitors second. The second half was a bit of a non event with most people's attention sadly focused on events on the terraces and many may well have missed Possebon's wonderful 80th minute long range strike which sailed over Coates before dipping viciously...it was a goal that was at odds with the unedifying events of this particular afternoon.