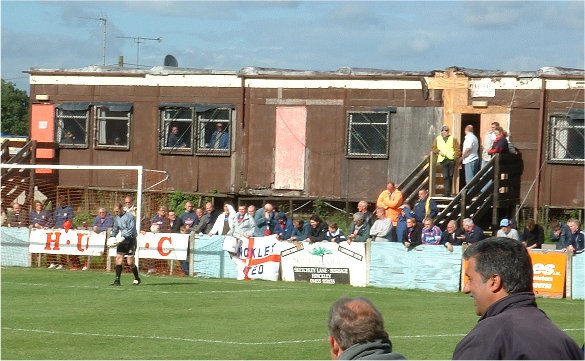 Stuart Coburn prepares a goalkick, as a Hucknall fan bangs his drum in front of the clubhouse - which has seen better days. Hinckley's new ground opens in December..

In a match ruined as a spectacle by a squally wind, Alty fell behind after just four minutes when Stuart Coburn rushed outside the box and was beaten to the ball by a Hinckley player. The ball was then played back across goal from the right where Lamey converted from close in, though Aspinall almost kept the ball out, on the line. Coburn redeemed himself with a quite magnificent save from Barnes (26 mins) but overall it was a below par first half performance from Altrincham. However, after the break, Alty equalised when Little expertly converted a low cross ball from Aspinall (58 mins). After this Alty looked the better side and only the referee's premature whistle for an Alty freekick denied them a goal after Potts had been fouled but, nevertheless, found Little in front of goal. Hinckley then snatched a late winner. This again came after Coburn had rushed to kick clear from the edge of his box, only to be clattered by the late-arriving Lewis after he had cleared the ball. After treatment to his leg, Coburn resumed but a Hinckley throw, rather than an Alty freekick, restarted the game. From this, a ball was played diagonally across the Alty box to Lewis at the back post in what appeared to be a clearly offside position. However, he knocked the ball in and the goal stood (83 mins). Alty are now 10th.