This match was played on Old Alts' new pitch at Crossford Bridge, on the banks of the River Mersey, next to Sale Harriers' track facilities. The major widening works on the M60 had meant that Old Alts' former pitch had been displaced and the contractors had resited it. This game was to mark the formal opening of the new pitch. Old Alts were promoted to the Air Miles Manchester League Premier Division at the end of last season.

With Graham Heathcote on a deserved pre-season holiday in Spain, assistant manager Dalton Steele was in charge of a squad made up of players from various sources. The starting line-up was made up of first-teamers who were either to be suspended at the start of the season (Maddox, Shuttleworth), players recovering from injury (Hussin, Smith), first team squad members who had not been regular starters last season (Kieran Lugsden, Stuart Wright, David Holt) and members of the newly re-formed Altrincham Reserves (Blower, Marsden, Melling, Kennedy). On the bench were Adayo, (a Reserves' midfielder), Jamie Almond, (who played one match as a sub at the end of last season) and midfield trialists Joey Roberts (who appeared against Hyde last month) and Mike Coates.

A crowd of more than 100 turned out to watch this match on a warm evening. The new Old Alts' pitch has the M60 slip road at Stretford behind it on one side and the Sale Harriers running track on the other. The pitch looked in good condition for its inaugural game and within 30 seconds of kick-off Alty had won a corner on the right. Nothing came of this and the nearest to a goal in the early stages was when the Old Alts' keeper had to rush out to smother the ball as Lugsden got free inside the box (7 mins). Old Alts then went close when a cross from the left dipped under the bar and teenage goalkeeper Blower did well to palm it over his own bar for a corner (8 mins).

Perhaps not surprisingly, given the varying backgrounds of the Altrincham players, their passing went astray quite regularly in the early stages but they gradually settled. It was good to see Sean Smith back in action after 18 months of being sidelined by his car accident injuries and it was he who won the ball and fed Stuart Wright, who in turn set up Lugsden for a shot which went wide (12 mins). The lively Lugsden then won a throw but shortly after this Stuart Wright was hurt by a very late tackle inside the centre-circle. After treatment, Wright limped off and took no further part in the game; his injury appeared to be to the lower shin, just above the ankle. Trialist Joey Roberts replaced Wright in central midfield (17 mins). 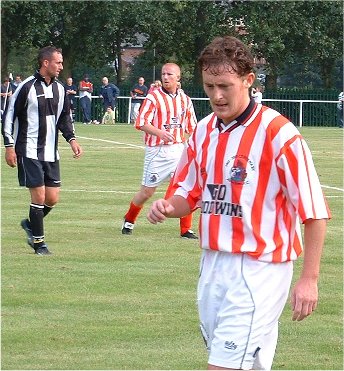 Left: Barry Shuttleworth, with Eddie Hussin in the background

From a Smith feed, Holt then shot wide before a Barry Shuttleworth freekick led only to a goalkick (19 mins). Melling was having a good game at centre-back and he cleared up after Roberts lost possession but was then brought down by one of a number of robust Old Alts' challenges during this game (21 mins). Old Alts then wasted a chance by shooting high over the bar from the left. Kieran Lugsden became Alty's second injured player but after treatment he limped on. Maddox then had to concede a corner to Old Alts just before Levi Kennedy, playing on the right flank, became the third Alty player to need treatment (25 mins). Alty are still without a qualified physio so it is to be hoped that one is appointed soon! It soon became clear that Kieran Lugsden was unable to carry on so Jamie Almond replaced him up front, alongside David Holt who was showing plenty of energy (26 mins). The midfield now had Smith and Kennedy wide with Roberts and Hussin central, whilst Marsden, Melling, Maddox and Shuttleworth were the back four. The injury jinx continued as now Melling needed treatment (30 mins). Almond soon got on the end of a Kennedy cross but the keeper saved.

After Roberts had sliced a shot very wide, the former Morecambe youth player George Melling again showed good positional sense in clearing up danger after a misheader by Maddox (35 mins). Old Alts' number nine did put the ball in the net from a pass from the left soon after this but the flag had already gone up for offside (39 mins). Almond was beginning to show his skills up front and Roberts too was settling in and it was he who completed an Alty passing move with a shot narrowly wide of the target (42 mins). Alty's fifth first-half injury to require treatment was a second blow for Levi Kennedy who suffered a facial injury, just before the interval. The half ended goalless which was a fair reflection of play. Altrincham's multi-sourced side had not really gelled.

Amongst the spectators were Alty first-teamers Stephen Rose, Niell Hardy and Chris Adams as the second half began. A ball into the box from Marsden, who was looking good for Alty, saw Almond make an aerial challenge only to be brought to the ground by his marker, the Old Alts' number six. A penalty was given and Barry Shuttleworth made no mistake from the spot, driving the ball into the top of the net (48 mins). Alty now started to play better football before making another change, with Kennedy being replaced on the right wing by Reserves' midfielder, Adayo, and Kieran Lugsden returning up front instead of Holt (51 mins). Old Alts made a double substitution before Alty then brought on trialist Mike Coates for Eddie Hussin, who had been easing himself gently back into action after his summer operation (53 mins). Shuttleworth continued to prompt movements up the left side whilst Adayo was showing a skilful touch on the right in tandem with Marsden. After a shaky start, Coates settled down with Roberts in central midfield but it was Old Alts who next went close next when Maddox was beaten but Blower saved the resulting shot (55 mins). At this point Holt came on again as Lugsden was clearly disabled by his earlier knock.

A 13-pass Alty move came to nothing before Old Alts responded though an advance by their no.17 on the left, but Alty won the next corner, on the right, through Holt (60 mins). Holt himself took it and Melling arrived late, near the back post, to head it firmly home (60 mins) and make it 2-0 to the visitors. Old Alts now made another substitution and soon their no.14 won a corner. Adayo then did well on the right for Alty but his cross was cleared before another Old Alts' substitution took place (66 mins). Holt and Roberts then combined well for Marsden to get in a rising shot which went wide from 20 yards (67 mins). Soon, Marsden fed Almond and he neatly returned the pass but Marsden's effort went just wide (67 mins). Blower then had did very well to dive at the feet of the Alts' no.10 who had got behind the defence after a pass from the no.12. When Holt shot over the bar from Adayo's feed it looked as if Alty would, at the very least, hold their lead comfortably (72 mins). But then a ball into the Alty box saw the no.10 for Old Alts and goalkeeper Blower arrive simultaneously but the Old Alts man won the clash and was left with an open goal to make it 1-2 (74 mins).

After Smith and Coates had both gone for the same ball in front of goal, Melling again did well at the back to clear for a corner. Then, when the Old Alts no.12 got onto a ball which Maddox had let go, it was Melling who once again cleared (78 mins). From a cross from the right by Old Alts, the referee awarded a rather harsh penalty for an aerial challenge on an Old Alts player. The no.12 coolly slotted it past Blower's right hand, low into the corner, though the keeper almost got to it (80 mins).

However, when Shuttleworth was clearly held inside the box at the other end, the referee waved play-on. Shuttleworth did take a freekick at goal soon afterwards, after a crude challenge on Coates by the no.3 on the edge of the box. But Shuttleworth's curler was well wide of goal (83 mins. Roberts then fed Holt whose low shot was saved. Nice play by Shuttleworth led to Almond feeding Roberts whose left footed curler went just wide (85 mins). There was then a crude challenge on Smith on the left wing which saw him need treatment. At this poinnt, Dalton Steele signalled to the ref, seeming to indicate that he wanted the game to end. After the freekick for the foul had been taken, the ref. did blow the final whistle a few minutes early.

The mixed nature of the Alty team was always going to mean that a fluent performance was unlikely and this was indeed the case. It is to be hoped that the series of Altrincham injuries incurred tonight, especially those to Lugsden and Wright, will not turn out to be as serious as they appeared to be. Both would seem to be very doubtful for Friday's game at home to Blackburn Rovers which, after this inaugural match on Old Alts' new pitch will be the first game to be played on Moss Lane's new playing surface.