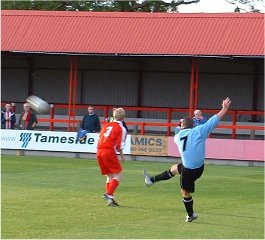 Above, Gary Scott gets in a cross at Ewen Fields.

An 84th equaliser from substitute Andy Waine deprived Alty of their 100% pre-season record but Hyde were good value for their draw. A well-taken goal by Peter Wright, after a good pass from Hardy, had put Alty ahead after 58 minutes but the Tigers' slick passing eventually got its reward with Waine's equaliser. A new face for Alty was substitute midfielder Joey Roberts, who was most recently at Wigan Athletic and Accrington.