Alty started the game well and, after five minutes, Peter Band forced a save from Ndjebayi after Gallagher's determination had won the ball on the right. After a foul on Band, Adams tried a free-kick routine involving Gary Talbot at the near post but, this time, the ball ran to the opposition keeper. Almond sparked an upturn in Mossley's performance with a fine run which ended with Brookes caught offside (8 mins). Mossley won the game's first corner, on their right. However, Alty replied with Gallagher and Ryan combining to feed Rose, on the right. Rose's cross to Band led to a good opening for Gallagher but he sidefooted his effort over the bar rather than driving through the ball (10 mins). As Mossley upped their game, Alty manager Graham Heathcote grew more animated with a missed offside decision particularly annoying him. After Ellison had fired in a 20 yard shot which cleared the bar (16 mins), Alty changed things round with Gallagher being withdrawn in favour of Lunt. The sub went up front, with Craney, allowing Band to withdraw to midfield (18 mins). Soon after his arrival a good pass from Craney released Lunt, who half-stopped as the home crowd called for offside, but no whistle came to stop him. The Alty striker kept going but drove his shot against the oncoming keeper to win his side's first corner (22 mins). 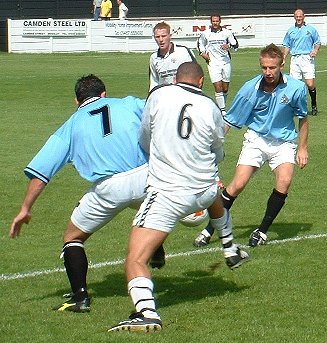 Right: Jason Gallagher (no.7) battles for possession with Mossley's Ellison, as Stephen Rose looks on.

After a Craney shot had been blocked, the same Alty man fed Rose as he advanced into the box. However, Rose's low cross was cleared. Soon, however, another Rose cross from the right found Shuttleworth at the back post and his header hit the framework of the goal but, for the second match running, Band reacted quickly to head home the rebound (26 mins). Soon Band had a good shot from 25 yards, which cleared the bar, as Alty now had the upper hand. This was underlined when good work by Craney set up Lunt who produced a good save from Ndjebayi; the clearance was completed by a defender (28 mins). Aspinall then won possession and strode on to drive in a shot from 20 yards which the keeper again saved well, at the second attempt (29 mins). With Alty now on top, Mossley brought on Heaton for Ellison, who had been carrying an injury (33 mins).

From an Acton clearance, Band and Rose combined for the latter's cross to produce a good catch by Ndjebayi (36 mins). A good move from Mossley ended with a 20 yard effort driven over Acton's bar (38 mins) before Rose won his side a corner on the right. Taken by Shuttleworth, the keeper tipped the corner-ball away and his team-mates eventually scrambled the ball clear. Adams then did well and, from Craney's resulting cross, Band flicked an effort just wide (41 mins). Alty's next good chance came when Band won a header which ran to Lunt but his poked shot was saved by the keeper. Mossley then won a corner off Adams but Cross's corner was cleared. Half-time arrived with Alty one ahead.

At the interval, Mossley brought on Carroll for Kilheeney and Dalloway for Ndjebayi in goal. A cross from the right was headed by Carroll and with Acton off his line, it dropped onto the roof of the net (46 mins). A neat Alty move involving Ryan, Adams, Rose and Lunt ended with Craney's 20-yarder which won a corner. Mossley were twice caught offside before Matty Taylor forced a good save from Acton (53 mins). Aspinall then shot over the bar from 30 yards before a foul by Heaton on Aspinall led to a lecture from the referee (58 mins). Craney had the ball in the net soon afterwards but the whistle had long gone. Then, Rose's cross saw Shuttleworth's header clear the bar (60 mins). The Alty defence continued to stand firm before Shuttleworth won a corner on the left, which was soon followed by another (62 mins).

Right: Steve Lunt picks himself up after scoring but Barry Shuttleworth is too busy adjusting his socks to notice!

Mossley now made a triple change with Hancock, Sheil and a no.17 (Andy Bridge?) arriving on the field (63 mins). Mossley soon won a corner, before a 22 yard shot from Craney forced a good save from Dalloway (69 mins), which he followed up moments later with another good shot which went just wide from 22 yards. Next Lunt found Shuttleworth on the left. Shuttleworth's cross into the 6-yard box was met by Cross who tried to get the ball back to his keeper only for Lunt to dive forward to head the ball home off the post (72 mins). Immediately Matthews replaced Shuttleworth. Soon after the restart a fine ball by Band gave Craney a shot which produced a fine save by the keeper (72 mins). Undaunted, Mossley won a corner immediately afterwards before Tunnicliffe replaced Maddox for Alty (73 mins). Rose moved to centre-back. Matthews then found Lunt who sliced his shot wide from 20 yards (75 mins) as Alty continued on top. But, as the last ten minutes arrived, Acton saved a shot from Howard before great skill by Sheil led to Carroll winning a corner off Talbot (82 mins). With four minutes left Acton collected a through ball only to be caught very late by a raised leg by Hancock, who received a lecture for his offence. Soon, Mossley won a corner when Carroll's shot deflected off Rose (88 mins) and then excellent skill by Almond beat his marker and saw him shoot narrowly wide into the side netting (89 mins). Despite Mossley's late efforts, Alty kept their third clean-sheet of the week.

So, Altrincham extended their unbeaten pre-season run to eight games, with six away wins and two home draws. The back four is looking to be a solid unit, with Maddox and Talbot at its heart, whilst newcomers Aspinall and Matthews are settling well in midfield whilst Craney had an excellent game after his quiet performance at Cammell Laird. Despite the lack of dedicated strikers, Alty have scored in all eight pre-season games but the side will have two tough tests in the coming week with Bradford City and Blackburn Rovers the visitors to Moss Lane.