Alty deservedly took a two-goal lead inside 24 minutes before United pulled one back and began to assert themselves. However, Alty withstood the pressure well and United did not draw level till the last quarter of the game only for Alty to restore their lead immediately. A debatably off-side goal restored United to parity with just under a quarter of an hour to go. Alty were very good value for their draw.

Moss Lane was in superb condition after much close-season work by groundsman Peter Barry in conjunction with Manchester United's groundstaff. The pitch had been levelled and the new goalposts were allegedly those used in this summer's 2003 European Champions' League Final at Old Trafford. Indeed, some football-post devotees had travelled considerable distances to have their photos taken in front of the "historic" uprights before this game!

The match was preceded by a minute's silence for Ernie Mansell, a long-time season-ticket holder at Moss Lane, who had died at 3am this morning.

Alty kicked off towards the 20/20 End but it was United's Eddie Johnson who had the first opening, only for Richard Acton to make a timely advance to smother the ball (2 mins). Soon, Steve Aspinall got space on the Alty right but his cross found no colleague in the centre (4 mins). However, after Chris Adams had won possession well, the ball came to Rob Matthews, to the right of goal and his firm shot produced a fine save from keeper Williams. From the resulting corner, Robertson seemed to have hit his cross too far beyond the back post from the right of goal. However, Gary Talbot did well to head the ball back into the box where Ian Craney finished cleanly from 15 yards, slightly left of centre, to put Alty ahead (6 mins). 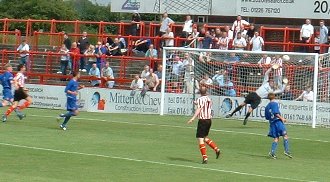 United almost equalised when Matthew Williams turned Maddox on the edge of the box and curled his shot just wide of Acton's left upright. However, Altrincham were showing more commitment than their visitors at this stage with Robertson, Rose and Matthews all dispossessing their opponents in the early stages. From Robertson's' interception the ball came to Hughes via Craney and his chip was well saved by Ben Williams (9 mins). Richard Acton, too, was continuing his fine form of Thursday night and he rushed out smartly to smother the ball from Johnson (15 mins). Matthews got in another good shot from a fine pass forward by Maddox a minute later but Ben Williams saved well. United then won two corners in quick succession but these were cleared. Soon, Alty doubled their lead following good skill by Ian Craney, wide on the left. He fed Hughes who drove the ball home with a low shot from the outer left quadrant of the penalty area (24 mins).

However, United almost immediately got back into the match when a clearance from Talbot was picked up by Byrne, who fed Matthew Williams who gave Acton no chance from 12 yards (26 mins). The United youngsters now stepped up their game and pinned Alty back for much of the remainder of the first half. Scott had to make a fine stretching interception which forced Acton to a full-length save (33 mins). United won a corner (37 mins) before a cross from Matt Williams went via Lee to Johnson, who hooked the ball just over the Alty bar (38 mins). Acton had to make another good save before Craney gave his side some relief with a fine pass to Matthews, who had switched to the left. Unfortunately, Matthews's final ball did not find a colleague. The half ended with Alty deserving their lead but with United's revival suggesting a more difficult second period.

United made eight changes at the interval, whilst Alty replaced Hughes by Lunt up front. The new United players were Bardsley, Jowsey, Hogg, Picken, Poole, Eckersley, Calliste and an unnamed no.18. Only Tate, Tierney and Matt Williams survived United's half-time cull. United started the half once more in the ascendant and won two early corners. However, the United defence, which played well today, rode out the pressure until Alty made a double switch with Gallagher and Ryan replacing Matthews and Rose in midfield (56 mins). Both departing players had had good games.

Altrincham now enjoyed a better spell after United's early second-half pressure and a good ball from Aspinall led to Craney winning a free-kick when he was flattened on the very edge of the United box, in a central position. Aspinall drove the free-kick into the wall. The Alty goal then had a narrow escape when a mishit shot by Poole, from an acute angle left of goal, ran across the prostrate Acton and Adams had to clear the ball off the line. Alty now replaced Robertson by Tunnicliffe (65 mins), on the left, before Poole got in a shot which went well wide of the Alty goal (69 mins). Alty then had a goal disallowed when, following an Adams free-kick, Lunt battled well and the loose ball fell for Maddox who knocked it joyfully into the net. However, the goal was ruled out, presumably for an offence by Lunt on the keeper (70 mins).

United equalised after a free-kick some 22 yards out from which Calliste and Poole combined well for Matt Williams to drive the ball low past Acton from 16 yards or so (72 mins). However, within a minute Alty were ahead again when Aspinall's ball was miskicked by Tate to Craney who blasted it home from a right-central position. The goalmouth action continued with United's no.18 getting clear but Acton made a great stop. However, a free-kick was awarded to Altrincham in any case. Then, youth teamer Jon McEvoy replaced Aspinall on the right for Alty (76 mins). Soon afterwards, Eckersley played a ball behind the Alty central defence to Poole, who looked well offside near the penalty spot. However, he picked his spot and although the referee hesitated and looked at his linesman, the flag stayed down and the equaliser stood (77 mins).

Lunt and Craney then combined neatly but Jowsey did well to hold Craney's resulting 25 yarder. After Calliste had clearly fouled Maddox, the Alty centre-back took a wild kick at his opponent and earned the game's only serious lecture. The game was now even but it was Alty who came the closer to a winner. From a corner taken by Ryan, Talbot looped a header which Jowsey had to be alert to tip over his bar. The second corner was cleared before Chris Adams saw off United's last threat when Calliste got clear of Lunt and Talbot (87 mins).

This was a much improved performance by Alty compared with the Woodley game and they more than deserved their draw. The defence and Richard Acton played well against a slick passing side, whilst Rose and Craney, who would have been Man of the Match had there been one, combined well in midfield. Newcomer Matthews looked very useful and Aspinall also showed some good touches. Robertson, too, was more involved than on Thursday whilst Mattie Hughes was bright during the opening spell.